Picking time for a puja to perform upaya is very important. If you want to insure that the remedy will work effectively and quickly you must pick the time appropriately. This is one technique that is very effective for finding the right time to perform weekly puja. 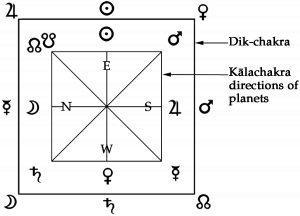 When you worship the diety of a direction you get the aspects of that lord. Jupiter worships Ishan, to get a very high knowledge. It is this higher knowledge that can get one over Rahu.

The Sun sits in Indra Kendra and worships Indra to get power, rulership and the ability to lead others. The Sun in the Kalachakra represents our ego while in the dig chakra it represents our atma (soul). It is atma jnana (self-knowledge) that finally gets one over the ego, and a humble ruler that cares for the people properly. Venus is in the direction of Agni because of the energy needed to sustain creativity (on all levels).
It is Venus that gets over the negativity of Mars, love that gets over anger and war. And as Hanuman is the celibate deity, Mars is an indicator of celibacy, and it is Venus that gets over celibacy.

Mars sits in the Southern direction and worships Yama, the god of death, to be victorious in battle. The soldier must have the blessings of Yama to kill the enemy and not have Yama come for himself. Mars gets over the more complacent side of Jupiter. Jupiter can want peace at all costs and will not stand up to negativity by himself. It is Mars that motivates Jupiter to put dharma into action.

Rahu rules the Southwest worshipping the Rakshasi (demoness) Niritti, to get al the negative, destructive things he wants in life. Mercury can tends to be too detail oriented and have exaggerated virtuousness, Rahu removes this. Mecury can also tend to be too superficial with book knowledge and Rahu leads one into deeper questioning, research, and experience to can first hand knowledge. Saturn sits in the West worshipping lord Varuna, the keeper of Rtu, the cosmic law and order. It is Saturn that can control the overuse of Venus energies. The Moon sits in the North West worshipping Vayu, the god of the wind and the life breathe. It is the Moon that gives us life, prana, nourishes, and heals. Vayu is the foundational lord of the prana in and outside the body. The Moon overcomes the negative aspects of Saturn, softens the hardness, nourishes the depleted, heals the sick, and makes the prana flow where Saturn blocks it. Mercury sits in the North Worshipping Kubera, the lord of wealth. Mercury is a businessman and the lord wealth is the success of most businessmen. Mercury uses logic and removes the emotional aspect of the mind. The Moon is balanced by Logic as it can become trapped in the cycle of emotions. These are all just very simple explanations of how the planets in the digchakra balance the planets in the kalachakra and how the two relate. It can be gone into with much greater depth with your own meditation on how the planets relate. Note that this is talking about energies of the planets and not conjunctions of those planets.

The Sun had two children that are connected to time. Yama, the Dharmaraj, from his wife Sunya. As Yama upholds Dharma his time is calculated from Sunrise. The other Sun was Kaala born from Chaya, the shadow of his wife. Kaala was not interested in following his father and so does not depend on Sunrise. A kaala starts at 6 in the morning no matter when the sun rises. The day is split into 16 kalas, 8 during the day and 8 at night. The kaalas last 1½ hours, which makes exactly 12 hours in each part of the day and night all year round and in every place. The first kaala starts with the day lord and continues around the kalachakra in a clockwise manner. So if the day is Monday, the first kaala is ruled by Moon (6 to 7:30). The next kaala would be of Rahu from 7:30 to 9:00. I have made a chart to simplify this, but it can easily be calculated by remembering the order of the planets on the kalachakra.

The best time to do a weekly puja to a planet are on the day of the sign lord at the kaala of the planet. So if one has Moon in Aries, the best time for that individual’s Chandra Puja is On Tuesday at Moon Kaala (1:30-3:00). If Jupiter is in Capricorn then weekly Guru puja/upaya can be done on Saturday at 1:30 to 3:00. 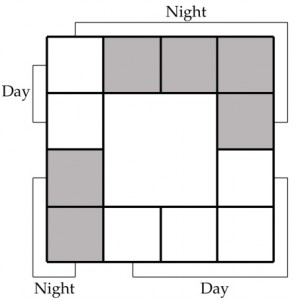 The timing can even get more specific if the day and night signs are taken into account. If Venus is in the Mercury’s night sign, Gemini, then the Upaya is best done Wednesday night at 7:30 to 9pm. If Venus was in Virgo, Mercury’s day sign then it would be better to do the puja Wednesday morning at 7:30 to 9am. This can be followed in many cases except when the time is late in the night. For example, Mars in Sagittarius would have its best time on Thursday night at 3 to 4:30am. As one would be unlikely to employ at pujari at this time or do other upayas like feeding dogs etc. then it would be better to use the day timing as next best. This timing is used for weekly pujas to remove the negative effects of planets.
Namah Sivaya