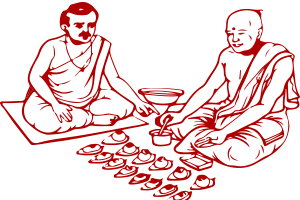 Pitṛ Doṣa is literally translated as ancestor problems. It will indicate some problem in ancestors of the last seven generations which directly affects an individual life. These problems (doṣa) may disturb/block (bādhaka) or afflict (śāpa) marriage, children, financial success or bring about various emotional and physical diseases. 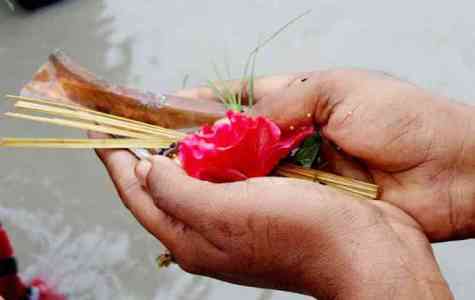 A pitṛ-śāpa (affliction carried from the ancestors) is indicated when the Sun or Moon are placed in a Mars ruled navāṁśa [and secondarily a Saturn ruled aṁśa]. The navāṁśa lord of a planet will be compared to being conjunct that planet, but the aṁśa lord controls how the planet is manifesting. Mars aṁśas can indicate breaking or destruction (naśa) which often happens quickly. If Venus is in a Mars ruled navāṁśa of a chart indicating divorce, it can show a quick break to marriage. If an afflicted Moon is in a Mars ruled saptāṁśa in a chart indicating loss of children, it can show early miscarriages. Mars generally represents some anger, upset or unsettled issue from the ancestors. Scorpio is the more difficult of the Mar’s ruled signs to overcome. Saturn will indicate some neglect or disconnection with the ancestors. Aquarius is the more difficult sign to overcome and considered to have a poisonous association. A Saturn aṁśa will indicate a slow drawn-out suffering and loss (kṣaya). If Venus is in a Saturn navāṁśa and divorce is indicated, it may be a very long, slow and painfully drawn-out divorce. If loss of child is indicated, and the Sun/Moon indicating the putra pitṛ doṣa is in a Saturn saptāṁśa, then there may be inability to conceive or disease that blocks conception, or the child may suffer some disease that either discontinues the pregnancy or creates a sickly child.

It is a severe pitṛ doṣa if the Sun or Moon are placed in bādhakasthāna in a Mars sign or aṁśa. This indicates not only a blockage (bādhaka), but one caused by the unsettled anger or upset (pitṛ–śāpa) of the ancestral karma. For example, if the lagna is Capricorn and the Moon is placed in the eleventh house in bādhakasthāna-Scorpio then there is pitṛ-bādhaka from the maternal side. As the Moon is debilitated, it will indicate unethical practices or actions out of integrity that were done on the maternal side of the family that need to be propitiated in order for there to be peacefulness and prosperity in the individual’s life. If it is Aries lagna and the Sun is in bādhakasthāna-Aquarius in the rāśi and Scorpio in the navāṁśa, then this is a pitṛ-bādhaka but because it is the Sun it would show that the condition comes from the paternal side of the family. Since the Sun is in a Saturn sign, it will indicate there is a lack of something done or taken care of, an important act that was not completed, or a role that was not properly carried out. The more specific differentiations will be indicated by aspects and the location of other planets. The navāṁśa sign will indicate the state of these ancestors, if it is a Mars sign, the ancestors are angry and will cause many negative events in the individuals life. In a Saturn sign, they will not give any guidance leading to all sorts of wrong choices in the person’s life. In other signs, the suffering is less, but the negative affect or history of the ancestors will be indicated by the aṁśa lord. 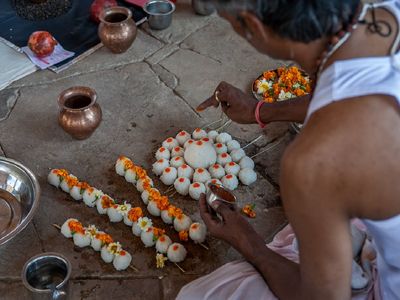 Pitṛ bādhaka can also be caused by Mars placed in the bādhaksthāna of Leo or Cancer. Libra has Leo as bādhaksthāna and Mars will be the lord of the second and seventh house. This will show that ancestral karma is blocking the ability to build financial stability and relationship happiness. Scorpio has Cancer as bādhaksthāna, and Mars is the lagneśa and sixth lord. It will cause bad decision making that leads to all types of problems until the ancestors are pacified. Saturn in the bādhaksthāna of Leo and Cancer can also indicate pitṛ-bādhaka, and Rāhu similarly placed will indicate a nāga bādhaka being carried through the family line.

Pitṛ bādhaka combinations in a natal chart will indicate lifelong issues unless there is resolution with the ancestors. Issues will be more pronounced in the appropriate viṁśottarī daśā that activates the planets/signs of the combination, but the general results would be there through out the life. These combinations can also be activated in a rāśi daśā during the sign in which they are bādhakasthāna from the active daśā rāśi; such as the rāśi daśā of Scorpio with Mars in Cancer or the rāśi daśā of Leo with Sun in Aries. This will indicate a particular period when ancestral issues arise in the individual’s life. Pūjā is required if the problems being suffered are shown to be related to the temporarily active pitṛ bādhaka. In a horary (praśna), these pitṛ doṣa combinations will either indicate or confirm that the person is dealing with ancestor issues.

The Sun or Moon conjunct two or more malefics in the navāṁśa will create paternal or maternal lineage complications needing to be addressed. If the Sun/Moon is in the sign of Mars or Saturn it is much more complicated and more difficult to overcome. This combination will show up as abuse, or trauma, or addiction or mental issues with the indicated parent that was inherited from a grandparent. The bādhaka shows issues from an unseen source and will therefore indicate unseen ancestors who have passed on from the earth plane who may have been passed on for a short or long time. The navāṁśā pitṛ doṣa indicates actions done from a previous incarnation (purva-janma) and afflictions to the Sun or Moon there may indicate suffering from a previous birth in the same family line.

Harihara lists some other combinations that cause ancestor or elder problems. The Sun or Moon in the sixth house or conjoining the sixth lord brings enmity to the figures indicated by the Sun or Moon. And the sixth lord in the ninth house, or ninth lord in twelfth house will create grievances between the father or elders. These type of combinations are pacified in this life. If the parents are alive, one should serve them properly, and only if they have passed then one should perform the proper annual rituals. If Saturn is associated with this combination, then it shows some practice or ritual has been forgotten, Mars shows something has been broken or there is some anger from something not performed. Rāhu will show the wrong actions/rites are being performed, or improper performance. Daniel Foor says a common question is “If my living family or recent ancestors are abusive, unloving, dysfunctional, absent, or otherwise uninspiring, why in the world would I want to connect with them?” One reason is to make sure that they’re not already connecting with you unhelpfully. Until the deceased join the ranks of the loving ancestors, they can weigh on the living relatives’ connections with each other and with older ancestors. Conversely, their successful transition may free up old blockages and support personal and family healing. But at no point does relating with your ancestors call for opening yourself to harmful or abusive energies from your family, living or deceased. To the contrary, positive change may call for you to establish healthy boundaries, both with your living relatives and with any of the deceased who are troubled in spirit.” [2]

Daniel Foor has an excellent book on addressing ancestral problems for individuals living in the industrialized world. I recommend it highly to those in need of working through a pitṛ doṣa along with [1] the required Vedic or Tāntrik mantras and [2] planetary charities. For Hindu clients who are following more traditional practices, I recommend PVR Narasimha Rao’s various manuals on the traditional Vedic methodology for Ancestral offerings and any required pūjā along with correct mantras and planetary charities.[3]

Daniel Foor’s book answers the majority of western questions regarding ancestor pacification practices and PVR Narasimha Rao answers many questions relative to traditional Vedic ancestral offerings.[4] He also clarifies that in some belief systems in India, they believe that only the oldest man in the household can worship and make offerings to the ancestors. Narasimha makes it clear that this is a constrictive opinion and that women and any aged individual can make offerings to the ancestors and work to clear ancestral karma.

For effective remedy, ancestral ritual and offerings should be done along with appropriate mantra and planetary charity for the suffering area of life (kāraka) and/or the afflicted house lord (bhāveśa), and/or the planet in the house related to the doṣa. Generally, the more afflicted planet (and house) involved will indicate the type of people who were previously hurt, and the afflicting planets (and house lord) will indicate the actions done to hurt them. Planetary charity to the signification of the afflicted planet (and house) helps to pacify the negative karma from the past. Mantra is chosen based upon the planet/sign that has the ability to bring and support the resources to overcome the doṣa.

I have included two examples below to demonstrate pitṛ doṣas. 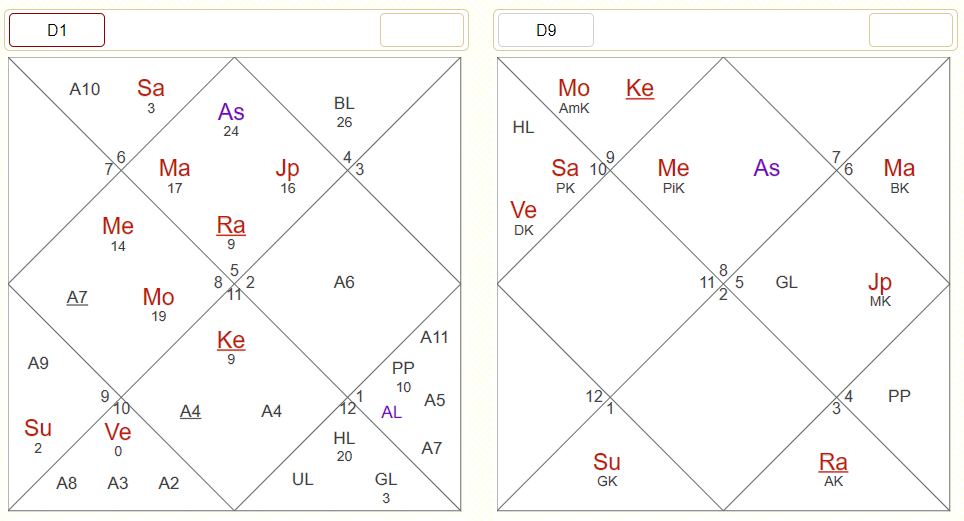 This female had difficulty getting pregnant and then had multiple miscarriages. The kāraka of children (Jupiter) is afflicted (śāpa) by Mars and Rāhu. Jupiter at 16-34 is in a yuddha with Mars at 17-20. Jupiter is also the fifth lord cursed and in yuddha. The Sun is in the fifth house, in exchange with Jupiter in the first house, which as a malefic planet leads to greater affliction of Jupiter. The ninth lord (for a woman) is also afflicted by Rāhu conjunction and being in a yuddha. The tenth lord (of paternal ancestors) is MKS. Jupiter is also placed in Leo in the navāṁśa, and Scorpio in the saptāṁśa, while the Sun is placed in an aṁśa of Mars (in Aries). So even though the Sun is exalted, this leads to various levels of miscarriage. After many attempts and losses, Vedic remedies and Āyurvedic treatments created the space for a pregnancy to come to completion. 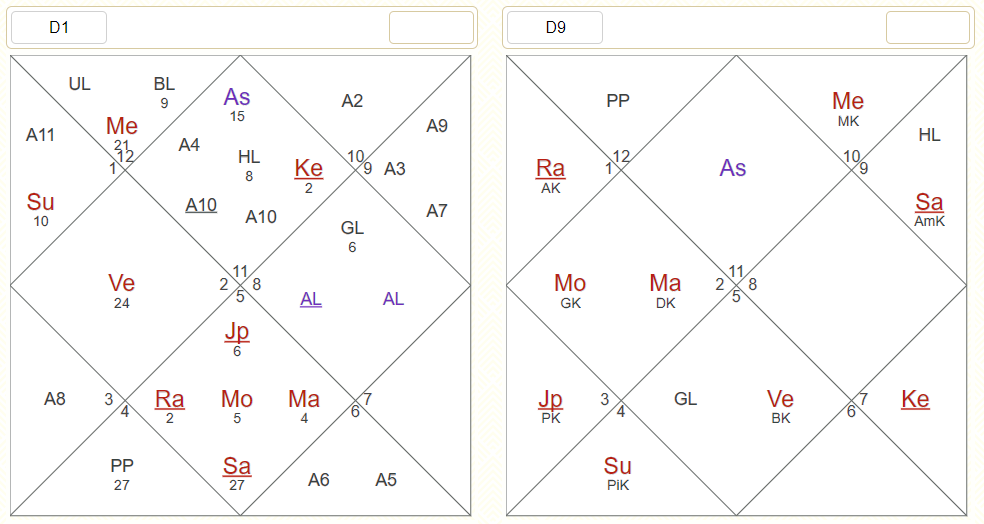 This male had a few high school relationships but has not had any relationships in the 40 years since. Jupiter and Moon are afflicted in the seventh house, in Leo. The Sun is in Aries (sign of Mars) and in exchange with Mars, giving two associations between the Sun and seventh house. The tenth lord is involved in the Jupiter-Moon affliction in Leo, while Moon is the sixth lord involved in the pitṛ doṣa. There are no children with fifth lord nīca and hemmed between malefics, and Jupiter in a śāpa. This is a pitṛ doṣa blocking relationship. 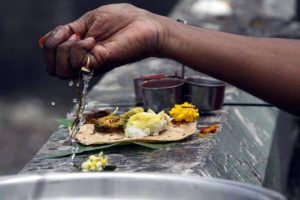 One can also make ritual and offerings on the lunar phase (puṇya tithi) that the departed soul left their body.

During the year, the best time to make pacifying ritual and offerings to the ancestors is the two weeks (pitṛ-pakṣa) from the full moon of the month of Badhrapada till the Amāvāsya that begins the month of Aśvin. This is the lunar time period that lead to the ancestral dark moon correlating to the western practice of All Souls night (which most likely was originally a lunar day). While those with a pitṛ doṣa may be required to do daily ancestral practices, those without these problems may make offerings on the monthly Amāvāsya and during Pitṛ pakṣa in order to have good relations with their ancestors. 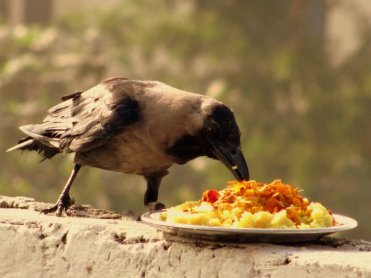