We live in a time period where we have a large impact upon the planet. It is important that the remedies we perform have a large impact. There are various rituals performed for nāga doṣas. Understanding the reason for those rituals, we can understand modern alternatives that have a huge impact for the whole planet.

Traces of tree and serpent worship have been found in all cultures across the globe. The snake, its connotations and powers has been propitiated or worshipped throughout time. This is a basic aspect of the collective human consciousness. Taking the collective understanding of the snake in various cultures and metaphoric interpretation of sarpas and nāgas we can gain a deeper understanding of nāga doṣa and sarpa-bādhaka. 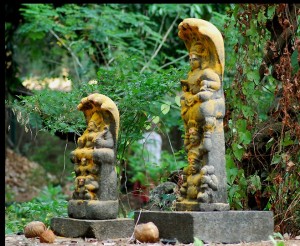 The fourth house remedial measures, as well as the causes for sarpa-bādhaka given by Harihara, show the link between the sacred groves and the nāgas. When Rāhu is in the fourth house and associated with the bādhakeśa then the installation of a citra kūṭa stone is indicated. A citra kūṭa is an image of a nāga or the nāga king which is placed by a large tree or in a sacred grove (sarpa kavu) where the sarpas/nāgas are said to live. These groves were often in the south-western direction. Traditionally large trees were always given space and worshiped. They were a habitat for animals, birds and insects (and ethereal beings)- an entire ecosystem alone. The sacred groves were parts of large properties or temples that were left undisturbed. Often they were perennial water sources. They relate in some way to modern day nature reserves, or watersheds. The ensuing remedies also relate to environmental remediation.

Rāhu in his Viṣṇu form is the one who saves the earth. In the negative, Rāhu becomes disturbed when one either destroys the environment or has destroyed natural habitat in a past life. The nāgas and sarpas can be seen as nature energies, and as the protectors of the nature spirits in the natural environments. Nature is a powerful force with many faces that needs to be respected. Propitiation of the nāgas is often seen as snake worship (ophiolatry), but it can be seen more as the propitiation of nature, its forces, and its protectors. 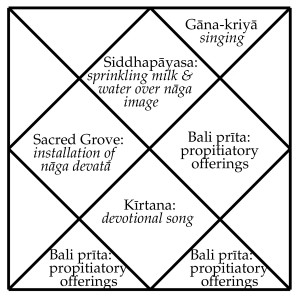 When Rāhu is placed in the lagna and associated with the bādhaka then the remedial measures are to offer milk and water to the image of the nāga. This image is found by an old tree or in a sacred grove in India. In the west, some type of nature shrine which gives respects to the nature element can be used instead. Rāhu placed in the seventh or twelfth and connected to bādhaka indicates the offering of song and music. This was normally done at the nāga image or in the sacred grove. The propitiatory rites to be offered when Rāhu is in the sixth, eighth or tenth are also best done in these places.

When Rāhu is in a cara rāśi the cause for the serpents anger is the destruction of serpent eggs. The traditional remedy is the donation of small golden eggs to the deity. The number of golden eggs relates to the bādhaka house; eleven eggs for moveable lagnas, nine eggs for fixed lagnas, and seven eggs for dual lagnas. This may be possible for some people in certain spaces, but it is not a convenient remedy for the majority of the planet, and for many people, it is strange and uncomfortable. In a modern interpretation, the cara rāśi represents the destruction of ecosystem breeding grounds, and one can donate to an organization which works to improve this part of the environment. The number of golden eggs would indicate the proper amount to give in donation. My clients that make donations, have seen quick results. One can follow the traditional remedy, a modern interpretation or do both.

When Rāhu is in a dual sign it indicates the killing of the young serpents. The traditional remedy is to offer small golden snakes in the number according to the lagna. The modern interpretation of this is that the karma relates to destruction of ecosystem where the young animals, serpents, birds, etc. mature and live. The modern remedy would be the support of conservation programs. Rāhu in a cara rāśi would support a project to raise the young in captivity to be released into nature, while in a dual rāśi they would support protection and remediation programs.

Rāhu in a fixed sign indicates the serpents are angry due to the cutting of trees (inanimate nature destroyed), and the traditional remedy is the replanting of trees. In the traditional sacred groves, whenever a tree was removed another tree was planted right away. In the modern world there are many reforestation projects and other projects where one can donate to or plant trees themselves if space allows.

Harihara gives further indications for the destruction of the environment (nāgālaya) which will later cause problems for the individual. If Mars is in kendra to Rāhu the reason for trouble is the destruction of the serpents abodes. This includes the levelling of forests, burning or cutting trees without replanting fresh trees, taking the earth, or levelling the anthills. If Saturn or Gulika are in kendra to Rāhu the abode of serpents has become unclean with trash and human waste. Low minded people hang out in the area, elephants trample the earth, or people freely plough and use the land for agriculture. The remedial indications are to keep the sacred groves well guarded, clean, plant fresh trees and do regular purification rites to the area. In modern day interpretation, one should properly keep their sacred grove if it exists. Otherwise, one should donate to parks and help ensure their upkeep.

Donating to organizations that benefit the environment according to the nature of the nāga doṣas is a remedy that can be done by anyone of any religion or faith, and the remedy is implicit within Jyotish scripture.  This is also a very beneficial remedy for Rāhu problems in gneral when  person will not do mantra or pūjā. It is best to donate regularly; setting up a payment program where money is given each month. Otherwise one must remember to donate monthly. I have collected a few organizations that I recommend for donation.

Naga Problems in a dual sign:
the restocking of wildlife
CA wildlife 911.org