Timing Pujas with the Tithis of Kalachakra 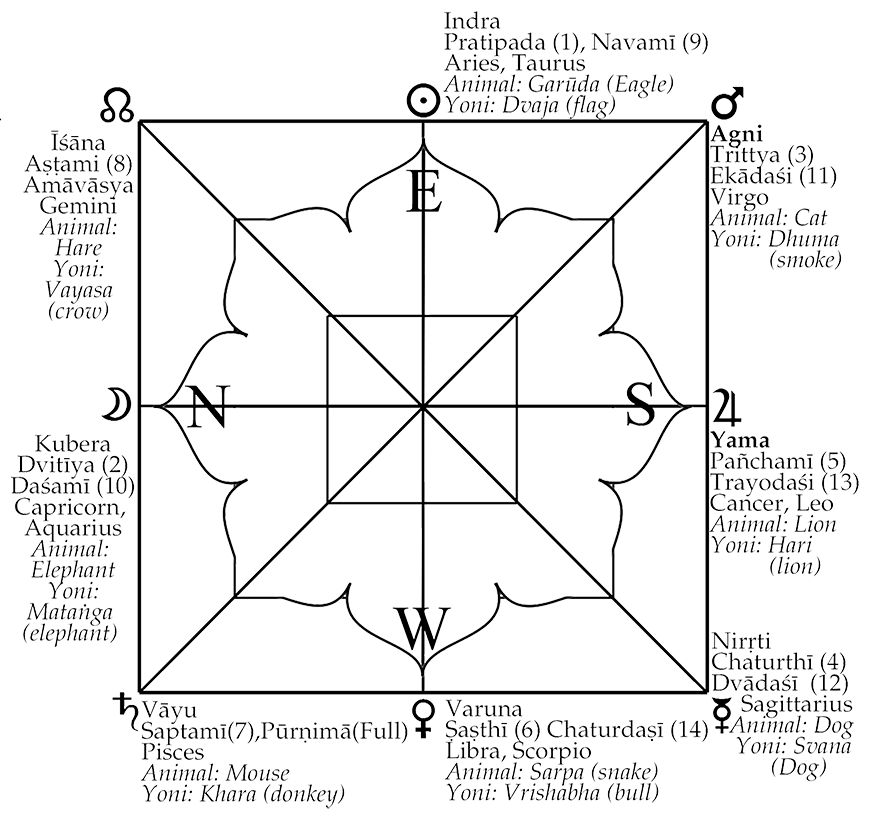 Pujas done to propitiate planets can be done at specific times that give them the power to overcome the problems of negative combinations, aspects and placements. Using the kalachakra one can calculate which day and tithi would be best to fast, do Pujas and other upayas.

The most powerful time to do a puja is when the vara day of a planet aligns with the tithi opposite it on the kalachakra. These certain days are very powerful for planetary propitiations. For example, worshipping the Sun on Shasti or Chaturdasi is auspicious because they are tithis ruled by its kalachakra opposite. Worshipping the Moon on Panchami and Trayodashi is auspicious because these tithis are ruled by the Moon’s opposite, Jupiter. Jupiter upaya is most powerful on a Thursday that falls on a Dvitiya or Dasami. When Thursday falls on a dasami it is called Sudasa vrata, which means the su (good) dasa (timeperiod) begins and the dur (bad) dasa ends. There are various rituals performed on that day. Worshipping a Mercury rupa is auspicious on Ashtami and Amavasya to destroy remove the evil effects of Rahu. When Wednesday falls on an Ashtami it is called Buddhastami, where the Rahu deluding the memory of Mercury can be removed with appropriate rituals. So propitiations for these planets should be done on the most powerful days. These days are used when a certain upaya like a single puja is advised to remove the ill effects of a planet.

Colors and the Kalachakra

This same concept can be applied with colors. The ‘tantric’ color of Mercury is black as Rahu is opposite it in the kalachakra. The ‘tantric’ color of the Sun is Saffron as Venus is opposite. The color opposite the planet will remove the negativity of the planet. The sanyasin wears saffron to be free of the negativities of Venus. White removes the negativities of Jupiter and yellow/gold removes the negativities of Moon. The color blue considered cooling by Ayurveda removes the negativities of hot planet Mars. The color red considered hot removes the negativities of the cold planet Saturn. The bright colors of Sun remove the negativity of Venus and the Colors of Nature remove the negativities of Rahu. Rahu is a planet causing anxiety. The greens and earth tones of Mercury heal the mind, nervous system and prana that have been damaged by Rahu. Rahu rules cities and stress, it is in the cities and stressful workplaces that we see the most anxiety problems arising in. In these places, there is a lack of nature and the natural colors of earth tones. In Ayurveda, it is believed that when you eat your pranic body opens up and absorbs the elements in your environment. So eating with evil people increases evil in you, eating with sages will increase your desire for knowledge. Eating in a busy city street is like eating Rahu himself, even if the food is sattvic, it has been destroyed by the environment you are absorbing as you eat. A remedy for anxiety caused by Rahu is take meals in a green place like a park or garden. By opening to the prana of nature and the colors of Mercury Rahu’s negativity is removed. This can be so affective people with anxiety do not need medication after some time. All the colors can be used in this way.

Note it is important to remember that this kalachakra color system is used in the environment or outside of puja. When you do puja you invoke the planet or deities of the colors you are wearing.