It was Wednesday, Holi Purnima, March 19, 2003 in Bhubaneshwar. Guruji was reading over some scriptures and laughs. He says, ‘They all call me an expert but everytime I open up Varahamihira it is like new’.

I then say that, ‘I have been wondering how it is one can remember so many scriptures, sometimes I read the same ones over and over, how can one remember? What deity to worship, or sadhana can be done to improve the memory?’

Guruji then pulls out the Bavishya Purana, flips through the pages and says to listen:

[Addressing Yudhistira], Bhagavan Sri Krsna said: Maharaj now I will teach you Buddhastami Vratta which when done by anybody the person will never see naraka (hell) afterlife. [Here is the mythology behind it]. During Satya Yuga, Ila was born to Manu, he was a king and always surrounding by his friends and well wishers. One day, while chasing a deer, he arrived near the Himalaya Mountains and entered a jungle. As soon as he entered he became a female. This jungle was earmarked for Shiva and Parvati. Lord Shiva had gaurded the jungle with his divine will [mantra] that whichever male shall enter this jungle, at that very moment he will be transformed into a female. Although Raja Ila had unwittingly entered the jungle, the will of Lord Shiva prevailed and his body was transformed. He could not understand what had happened to himself. At that very moment, Chandraputra (Mercury, son of the Moon) glanced at him. Mercury was enamored by the beauty and took him as a wife. Later they had a son named Puruvara. It is through Puruvara that the Chandramsa lineage of the Moon continued. 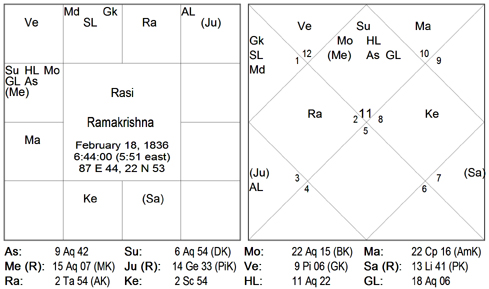 Guruji said: If Mercury is associated with the 7th house or connected with marriage then at some point of time physical transformation or hormonal changes may occur. It indicates sex change (both temporary and permanent) as well as homosexuality and in general a confusion of sexes. For example, Arjuna being the son of Indra (Jupiter) must have had a Jupitarian lagna and Mercury as a 7th lord caused a temporary transformation in which towards the end of his exile he was transformed into a lady (transvestite) and passed off as a female, because of his Mercury.

Another illustration, Ramakrisna Paramhamsa had a an Aquarius Lagna with Mercury, Sun, Moon in lagna. The 7th lord Sun is conjunct Mercury who is lord of the 5th (mantra). Mercury indicates Krsna. Ramakrisna did such powerful mantra and penance to Krsna that his body transformed and he started believing that he was Radha. It is known that he even started to menstrate.

Krsna says: The day Mercury married Ila was an Ashtami tithi (ruled by Rahu) and hence that day is known as Buddhashtami. This Buddhashtami has the power to destroy all evils and problems.

Now I will tell you another story: in Mithila (in Bihar) there was a king named Nimi who was a great destroyer of foes and enemies on the battlefield. He had a wife named Urilla. One day Nimi was killed on the battlefield and Urilla was driven away deprived of her kingdom. She took her son and daughter with her to the Avanti kingdom and started working in the house of a brahmin. She had many problems and at the time of grinding the wheat grains, she would steal a little bit for her children. After some time Urmilla passed away. Her son grew up, returned to Mithila and recovered his father’s lost kingdom. His sister named Shamala, married Raja Dharmaraj of Avanti and became the queen [Dharmaraj is another name for Yama]. One day Dharmaraj told Shamala that she could do anything, do any work she likes and go anywhere, except for seven rooms where she was not allowed to enter. Although Shamala agreed there was always doubt in her mind. Unable to quell her curiosity, she sneaked into the first room. There she was shocked to see her dead mother Urmilla, tied and being boiled in a pot of oil. In this manner as she entered each room she was horrified to see her passed away motherbeing tortured in different ways.

Seeing this gruesome sight, Shamala started thinking what type of sin her mother had done to receive this kind of misfortune and such torture after death. She begged her husband to explain. Yama Dharmaraj said, Dearest it is for this reason I warned you not to enter those rooms. Your mother becaue of her children stole wheat from a brahmin. Are you aware of this. This is the result of that karma.

The wealth of a brahmin should not be eaten or touched. What to talk of stealing it. As long as the Moon shall be with the stars, till then she will be tortured (naraka). Shamala begged her husband to tell her the way out of this sin and Dharmaraj taught her Buddhastami Vratta.

Lord Krsna continued: Oh King Yuddhistira, now I will tell you the method of doing the vrata. Whenever the sukla paksa Ashtami is also on a Wednesday, then only can the Buddhashtami vratta be done.

Guruji then looks up from his reading and says, “on the night of such an Ashtami, some of the most powerful rights pertaining to the netherworlds have been described in the various tantras, like putting spirits in bottles, making spirits your servants, etc”. He then continued reading.

Keep fast on the day, take a bath in the morning (preferably in a river) and bring water from the river in a new kalasha (special Indian water vessel). The kalasha has to be established in the house (in the puja room as part of kalasha puja). Place a small piece of gold inside the vessel in the water and cover it with a green coconut. On a patra (plate) made of bamboo, the following eight foods have to be offered: modhak, fanni, sweet poop made of ghee, wataka, etc. with flowers to be offered as navidya (prasad) to Buddha. Later they should be consumed by one’s self and others (friends and well wishers). Food is not to be touched and only the prasad can be eaten that day after the puja.

A murti (image) of Buddhagraha has to be prepared of 8 rati (1 masha) of gold. [It can be copper and plated in 8 ratis of gold]. The murti has to be worshipped with pancha upachara puja: ghandha pushpa, navidya, deepa, and péta vastra (yellow clothe).

The mantras located in the Bavishya Purana are to be used according to standard dictums of mantra shastra, with homa.

Then after completing 8 such Buddhashtami vrattas, the murti and some food need to be given to a brahmin (knowledgable astrologer who can worship on Wednesdays). It should be given with the mantra:

Krsna says: whichever person (astrologer) does this buddhastami vratta regularly, will have the power of jatismara (memory of past lives) for seven births. He will gain wealth, prosperity, children, grandchildren, long life and other such blessings. Finally, in his last moment he will remember Sri Narayana and leave his body in a very pure place like on a pilgrimage. Till the time of pralaya he will live in svarga. This vrata has the power to remove sins like Brahmana (killing of a brahmin or a cow).

Done with the reading, Guruji says, ” This vratta can increase the memory to such an extent that you remember your past lives.”

Looking over the material, I ask Guruji why to  put the piece of gold in the vessel. And Guruji replied, “you put a gold ring in the vessel for wearing after the puja. It is to be worn as it will contain all the mantras. And every Wednesday you have to do the mantras.”

I asked, “When traveling from India to the West and on all your tours it will vary whether the Wednesday is an Ashtami or a Navami. Do we calculate it from where we are as we travel?”

Guruji replied, “Calculate it from where you are for that Wednesday but when in doubt calculate it from Ujjain. This is where Mahakaleshwar sits and all things will work from His time.”

For the reason behind how the Tithis and Vara connect, see the section on Kalachakra.

I got myself an emerald ring, but i really dont know how to dedicate it correctly to Mercury. This is obviosly best day to do it, but is it wise to wear it before this day and what mantras/rituals i should do to that things work out correctly?

Could someone plz help me here? thanks..

Buddha Purnima is coming up, this will be a good muhurta for an emerald. The easiest muhurta for mantra/remedy/etc is a holiday of the related deity, like Rama navami for Sun remedies. [Or you can wait till the next Buddhastami if you will be doing homa.]

Worship Ganesh, then Guru. Fully surrender yourself to the Supreme Guru in the heart of All. Put the ring on a Shiva lingam, offer water and say mrityunjaya 108 times. Then wash with milk, then water again. Then put sandalwood powder in your left hand and close the ring in your palm, do nadi shodhana for 9 times. Then chant the proper mantra for number of times of the ashtottari dasha of the planet: Mercury is 17 years- so do 17 malas. Then put on the ring as you are saying the mantra, if you take the ring off, say the mantra when you put it back on.

The emerald can be recharged/purified by putting it in a kalasha of water during the buddhashtami puja. In this way the gold becomes buddhashtami gold and becomes activated to help remove the negative effects of Rahu.

Bamboo, The mantra for you: AUM durbuddhināśāya namaḥ

“praises to the one who removes bad memory/wrong thinking”

This is my understanding.

Thank you for your sincere help in here.