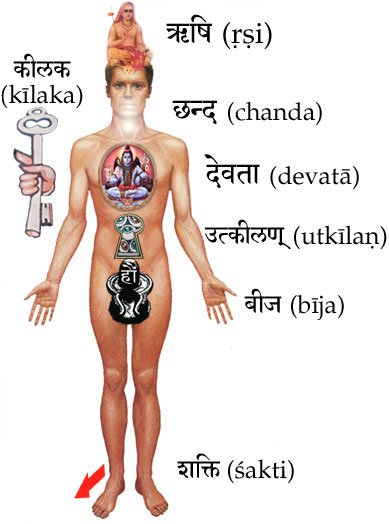 Chanda: The next part of mantra is the chanda (meter); how to say the mantra in a particular rhythm so the deity is pleased. One of the most powerful meters is gayatri. Gayatri has 24 syllables, the next chanda has 28 syllables, then the next has 32 (anustup chanda). It goes 4+4+4…this is the formula. In three movements gayatri can cross the zodiac two times, 24 syllables, 12 signs and 12 signs. 24 is auspicious because of the siddhamsa.

When chanda is perfect it creates a vibration in the room that continues in the room even after you have completed mantra. When gayatri is said once the whole room gets light. Proper chanda (meter) benefits all around. If said incorrect the person saying it will get benefit but not others, one cannot alter the vibration in a room, and will not be able to effect others. Chanda has the power to affect others.

Ishta devata is already in the heart, and you (atmakaraka) is already in the heart. In vishishtadvaita there is two, in advaita they are the same (there is just One). The mantra devata should never be inimical to the Ishta or the Atmakaraka, in temporal relationship according to the chart of an individual. If mantra devata hurts the Ishta or AK there will be a lot of trouble.

Certain devas are specific for certain purposes. The devata must even be individualized for the specific form of an individual deity, whether to use Kaleshwar or Mahakala. For example, Bhairav is used for problems with the Lagna, Kal-Bhairva is use for Saturn in the Lagna, Batuka is used for Mars in the Lagna. If the mantra devata is inimical to the lagna a person’s character will fall, they may get into bad things, the body will start to pain, and they may start sinful behavior.

Bija: Every mantra has a bija (seed syllable) from which it sprouts, which creates the mantra. Namah Sivaya comes form the bija ‘Haum’. Hare Krshna mahamantra comes from “Kleem’. When doing sadhanna (spiritual practice) the mantra should be placed on the lingam (within the root chakra). One should concentrate there and feel the mantra eminate and rise up from there, (this can lead some to fall into lower energies if not focused).Shakti: Every mantra has a Shakti which is established in the feet. The feet move you in a particular direction, as the sakti of a mantra guides you to go in a specific direction. “Gatistwam Gatistwam Twam Eka Bhavani”. It is the Shakti which gives gati (direction) in life.

Kilaka: The sealing and unsealing of a mantra. Every mantra is a temple and needs someone to open the door for you to go inside, utkilana- to unlock. This is why getting a mantra out of a book is almost impossible because you need someone to unlock the door to it. This can be from Guru Kripa, the guru’s grace: they open it for you, or they give you an utkilan mantra, they give you the key to unlock the mantra. Then you will get results quickly.
The key is in the solar plexus with the Sun god who is the Guru for everyone. The 1000 Maharishis sit in the Sun chariot with the keys. 1000 rays come from the Maharishis. When you pick up a mantra the rishi goes to the crown of the head (representative of the sahasrara). It is said in a year pick up one mantra, don’t pick up ten rishis at once. If one is doing multiple mantras at once, try to make them from the same rishi. But don’t randomly do many mantras from many random rishis.

Note: Stotrams reside in the heart and have built in unlocks but they can’t do as much as a mantra. Stotra is a dance between the atman and the paratman.

I give thanks to my Jyotisha Guru, Pandit Sanjay Rath