Each nakshatra pada has one sound. The padas relates to the navamsas and are displayed here accordingly.

The vowel sounds are based on Krittika which starts with a, i, u, e, o. These vowels repeat in this order with the addition of consonants. Each of the dual signs has an extra three aksharas included. Everything is written according to Itrans 99 and pronounced accordingly.

There are two main varieties of this chakra, one with 27 nakshatras and one with 28 nakshatras. This is the 27 nakshatra/108 sound chakra. For those wishing to use the 28 scheme the additional aksharas have been added in the center based on Vedic Remedies in Astrology by Sanjay Rath.

Respected authors have used both long and short vowels for the same placements. No place are they both used in a way that would differentiate them between padas, therefore I have used all short vowels and allow the short vowel to represent both. Any question regarding this aspect should be discussed with understanding of pancha svara dasa, where only a, i, u, e, and o are used as root vowels.

There are various sources (best being Phaladeepika) that have a slight variation of the exact syllables. I have tried to stay along the lines of BV Raman. One’s best judgment is advised, as aksharas vary depending on source. The most questionable aksharas are put in italics for known variability, this are mostly the additional aksharas added in the dual signs. 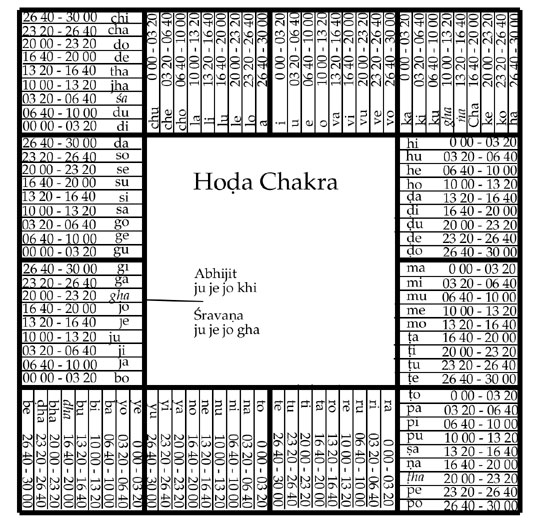