The Months of Pregnancy

Each month of the pregnancy is ruled by a planet. If there is any weakness in a planet at the time of conception there may be issues in the month of development ruled by that planet[1]. There is a difference in the rulership of the months between Jaimini and Varāhamihira. We will analyze Varāhamihira’s as they relate to the natural significations of the months of pregnancy.

The first month ruled by Venus is called Kalala, which is when the sperm and ovum mix and begin multiplying exponentially. Caraka Saṁhitā says that there is no distinct form in this month, yet all organs exist in their latent form[2]. Generally, in Jyotiṣa, calculations of pregnancy are calculated as 273 days based on the sidereal lunar months (39 weeks). Allopathic medicine considers pregnancy (called gestation) to last 40 weeks (280 days) but this is counted from the last menstruation. Conception is possible about two weeks after menstruation- which makes actual pregnancy about 38 weeks (266 days). This means when using allopathic gestational weeks to enumerate the time frame of pregnancy the first month is actually only two weeks, as the month is counted from the last menstruation. When an individual says they are 8 weeks pregnant (western gestational weeks), they are approximately 6 weeks from conception. Vedic reference is counted from the conception.

The second month ruled by Mars is called Ghana which means ‘solidified’ and relates to the densification of the embryo. The Greek roots of the word em-bryo relate to ‘inner-swelling’. In this month, the size will go from a poppy seed to a kidney bean with developing organ tissues.

The third month ruled by Jupiter is called Aṅkura which means to sprout. Caraka Saṁhitā says all sense organs, limbs of the body and internal organs manifest themselves simultaneously in this month according to the modification of the five elements. This month marks the end of the embryonic period (where there is the greatest chance of any malformation to take place) and the beginning of the fetal period. Suśruta Saṁhitā says when the embryo (garbha) develops hands, feet, sense organs, etc. it is called a body (śarīra); though in western medical terms it is now called a fetus. All material and spiritual phenomena of the universe are present in the fetus and everything in the fetus is present in the universe[3]. All deities can be identified in the body- Vāyu as the life force (prāṇa), Ākāṣa as the porous parts, Indra as the ahaṁkāra, the Aśvins as complexion, etc.[4] The body grows according to the same components that compose and guide the universe.

As the senses manifest, there is pulsation in the fetal heart tissue and the mind begins to feel. The fetus experiences desires related to its past life. The mother enters dauhṛdāvasthā-the state of two hearts. The fetal blood is oxygenated in the mother’s lungs. The mother begins to share the desires of the child because of this state of two hearts. The Āyurvedic texts caution that one must give the mother everything she desires (as long as its not harmful) because if not there could be vāta disturbance resulting in developmental issues or loss of the fetus at this time.

The fourth month ruled by the Sun is called Asthi which means ‘bone’ and is when the fetus develops structure. The bone begins to harden, teeth buds develop, the arms and legs develop to the proportion of the body, and reflexive movement stimulates kicking and stretching.

The fifth month is Carma which means ‘skin’. The skin grows in excess to be filled with fatty tissue later, the pigmentary and sweat glands become more clear, the vernix caseosa forms on the skin as a protective layer, the nervous sytem develops myelin and sensory development increases. The aspect of mind (manas) which processes sensory stimuli is developing. The fetus is aware of sounds outside the womb, sensitive to light, as well as smell and tastes which show up in the amniotic fluid of the mother quickly after ingestion.

The sixth month ruled by Saturn is called Aṅgaja which means produced from the body and represents the growth of hair and nails. The fetus is also practicing the use of its digestive system by taking the amniotic fluid into its digestive track and creating meconium. The lungs also take the amniotic fluid in and out while the muscles of the lungs function to prepare the muscles for breathing. Locomotor control in the brain begins to develop at this time (though just reflexive movements), as the nervous sytem and muscles integrate.

The seventh month ruled by Mercury is called Cetana-tā which means the state of sentience or consciousness- this is when the fetus is said to become fully aware of inside and outside the womb. The brain (mastiṣka) grows very quickly at this time. Modern research shows the thalamocortical connections are formed at this time which allows the true sensations of pleasure and pain. Some traditions say that this is when the soul enters the body as this is when it becomes conscious. Suśruta Saṁhitā’s opinion is that the fetus gets cetanā dhātu in the fourth month when its heart begins to operate fully as the heart is the seat of consciousness. The Āyurveda texts agree that the soul is needed to enter for the formation of an embryo to be established[5], therefore it is the working of the intelligence that starts during the seventh month. It is the mundane awareness of the buddhi which is ignited not the higher awareness of the jīvātman. 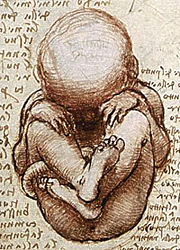 The eighth month ruled by the lagneça is called Bhavana which means a place, abode or coming into existence. The nutritional demands of the fetus increase and the mother is eating more. The ancient texts mention that this is when the fetus begins to feel desires of hunger and thirst; most likely this view was in response to the mother’s enlarged appetite for nutritious foods. Previously, the focus was on functional development while now the focus is growing bigger and the fetus begins putting on body fat at this point to prepare for emerging from the womb. There is a symbiotic relationship in the eighth month between the fetus and mother to develop the ojas (ojassancaraṇāvasthā).

The ninth month ruled by the Moon is called Udvega which means agitated. The fetus is fully functional and is moving excessively in the womb. Visible feet are seen on the mother’s belly as the fetus kicks and stretches. This was interpreted as the fetus showing readiness to leave the womb. Though by the end of this month and beginning of the next the movement slows down as the fetus grows so big it has no room to move.

The tenth month is called Prasava which means ‘to bring forth’ or delivery, it is also called the delivery month (sūti-māsa). Suśruta Saṁhitā says delivery is normal in the ninth or tenth month. In modern thought, thirty-seven to forty-two gestational weeks is considered full-term. Before that is pre-term delivery (34-36 weeks) and after 42 weeks is late. Only five to six percent of pregnancies go over forty-three weeks and these are more likely to have complications. A strong Venus will indicate earlier delivery (apūrṇakāla-ja). Venus is the kāraka for premature delivery, and when Venus is placed in the first or eighth house it can indicate premature delivery[6]. A very strong Jupiter will indicate later delivery and the baby should be born with more weight.

Jaimini also relates the houses from the Sun of the conception chart to the months of pregnancy[7]. The Moon is the sustainer of the body, but the Sun (Savitṛ) is the creator of the body. Therefore the first month relates to the house in which the Sun is placed- relating to the creative force driving the individual’s creation. The second month relates to the second house from the Sun- and so forth. The tenth house is the achievement of the creative being and the time to bring forth the creation.

The life process begins with mithuna, niṣeka, ādhāna, and the forty weeks of pregnancy. The grand finale is the actual birth (janma) at the appropriate birth time (janma-kāla).